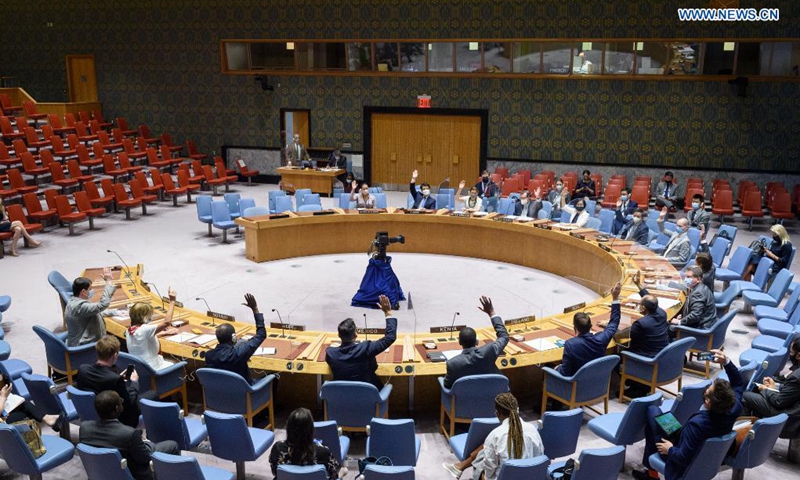 China had pushed forward a joint statement by the leaders of the five nuclear weapon states on preventing nuclear war and avoiding arms races issued on Monday by urging the others to join the reaffirmation that a nuclear war cannot be won and shall not be fought, after the process under the framework of the Non-Proliferation Treaty (NPT) remained in a state of inaction for a couple of years and despite resistance from the former Trump administration, a senior Chinese diplomat said on Tuesday.

As a good start to China’s diplomacy in 2022, China’s positive role in putting the five permanent members of the UN Security Council (P5) together in making the historic document showed the country’s global responsibility on nukes, and its no-first-use and minimal deterrence nuclear policies are examples to other nuclear powers, experts said.

This demonstrates the significance of this historic document, Fu said.

From China’s perspective, the affirmation that “a nuclear war cannot be won and must never be fought” is especially important, because this time around, it has been done collectively by the five under the current international situation, and this will go a long way toward alleviating China’s concerns, particularly on the risk of nuclear war and in reducing tensions, Fu said.

The joint statement comes at a time when international strategic security is facing many major challenges amid profound changes not seen in a century, including tensions in Europe over the Ukraine issue involving Russia and the US, in the Asia-Pacific over the Taiwan question involving China and the US, as well as the effects of the pandemic, observers said.

On whether the joint statement will help ease tensions in the Taiwan Straits, Fu said that it will be conducive, since the basic understanding of the true nature of nukes are that they are the ultimate deterrent and not for war. “This applies everywhere.”

Fu pointed out that the document was formulated within the P5 process, which is a process that was established under the framework of the NPT to coordinate nuclear issues. But for a couple of years, that process was in a state of inaction.

In 2019, when China coordinated the process, it tried its best to revitalize it, Fu said, noting that since then, China has been urging the P5 to collectively reaffirm this important principle that a nuclear war cannot be won and shall not be fought.

However, this met resistance from some countries. During that time, the Trump administration was not interested in arms control issues, Fu said.

But with President Joe Biden in office, the US decided to support the idea, Fu said, noting that Russia has been quite positive from the beginning with China, and the UK and France subsequently came on board.

China played a very positive role in revitalizing the process and in pushing for the conclusion of the document, Fu said, noting that China is now pushing to expand the subject on the P5 process, so that the process could discuss not only nuclear issues, but also other issues related to strategic stability, including outer space, missile defense, AI and other emerging technologies.

The joint statement said that the five countries’ leaders “reiterate the validity of our previous statements on de-targeting and reaffirming that none of our nuclear weapons are targeted at each other or at any other state.”

Chinese Vice Foreign Minister Ma Zhaoxu told media on Monday that this paragraph was included thanks to China’s push.

Some foreign analysts questioned the effect of the joint statement, claiming that the P5 is doing the opposite in reality, as they are in an arms race and prepared for a nuclear war.

Fu said that the joint statement is important in the sense that it is a confidence-building measure despite it being only a declaration, as it is expected to reduce the risk of an accidental or unauthorized launch of a nuclear weapon.

This is because the security environment has been changing as the US sees China as its biggest competitor, and it is using every means to contain China, including planning to spend trillions of dollars in the nuclear field, Fu said.

The past few years have witnessed the suspension of a number of important arms control treaties because of the unilateral withdrawal by the US under Trump.

The five countries’ leaders felt it necessary to reconfirm that they are committed to preserving and complying with arms control treaties, Fu said.

The leaders also reaffirmed their commitment to prevent military conflict and to avoid an arms race in the current international tensions in Europe and in the Asia-Pacific, Fu said.

China’s leading role in pushing forward with the joint statement displayed its responsibility as a major power in the world in maintaining global strategic stability, experts said.

As one of the P5 and a major political and economic influencer, China’s stance on nuclear weapons is of great importance to the world, Xu Guangyu, a Chinese military expert, told the Global Times on Tuesday.

The statement shows China’s responsible attitude, urging other countries not to abuse nuclear weapons and to contribute to safeguarding peace and stability, another Chinese military expert told the Global Times on Tuesday, requesting anonymity.

China’s responsibility on nuclear issues is not only shown in the statement, but also in other processes like the Iran nuclear deal.

Fu told the Global Times at the press briefing that as far as China’s position is concerned with the Joint Comprehensive Plan of Action (JCPOA), people first need to have a clear understanding of the basic logic–that is, the reason why we are here today as the JCPOA is in the state of crisis because of the unilateral withdrawal by the US. So it is only natural that the US should take measures to lift its illegal sanctions. On that basis, Iran should return to its commitment.

China urged all sides to show flexibility to accommodate the legitimate concerns of all sides, Fu said.

China is playing a positive role, and that has been acknowledged by all sides, by Iran and by the US, Fu said. “We have been pushing the two sides to be more forthcoming in the negotiations, in accommodating each other’s concerns. We also have come up with concrete proposals and to move the negotiations forward.”

China has also set an example for other nuclear-capable countries with its no-first-use and minimum deterrence nuclear policies, as the others should also have a wise and careful view on the deployment and use of nukes, experts said.